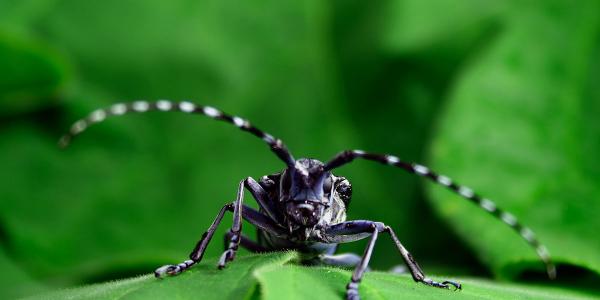 The Asian longhorned beetle, or Anoplophora gladbripennis, is an invasive species impacting wooded areas across the globe. In a paper published in Genome Biology, researchers from Baylor College of Medicine and the University of Memphis detail new findings in the beetle’s genome that allow it to thrive on tree bark and other wooded plant material, causing widespread destruction in the process.

In order to understand how the beetle has evolved to be able to digest and receive nutrients from wooded plants and trees, the research team sequenced and annotated its genome, studied the degrading enzymes in the cell walls of plants and compared the genomes of 14 other types of insects with the ability to digest woody plant material.

“In this case, when we fed beetle larvae on wood material from sugar maple trees, we found that the activity of the glycoside hydrolase genes was increased, something not seen in larvae fed on an artificial diet,” said Dr. Stephen Richards, co-lead author on the paper and associate professor in the Human Genome Sequencing Center at Baylor. “This experiment, along with our complementary analysis of the beetle genome, also revealed the specific set of genes, called CYP450 genes, which are involved in the detoxification of compounds encountered by the beetle when feeding on plant tissues.”

Dr. Duane McKenna, co-lead author from the University of Memphis, added, "Our detailed genomic analysis reveals that the Asian longhorned beetle has more than 1,000 genes that aren’t present in any other arthropod. We identified a total of 86 genes for enzymes called glycoside hydrolases – more than have been found in any other insect. These enzymes enable the beetle to digest woody plant material and detoxify plant chemicals and indicate a genetic reason for their apparent success in feeding on trees worldwide.”

The study has allowed the researchers to establish a genomic basis for the evolutionary techniques and tools to manage the presence and damage of the Asian longhorned beetle and other wood-boring pests.

“This publically available genome is part of a larger group as a pilot for the i5K initiative to sequence thousands of insects. We hope that, in the long term, this foundational information about how any species works can be made available to anyone interested in biology, from researchers addressing specific questions to high school students and hobbyist entomologists at home,” Richards said.