The BCM-HGSC sequenced and analyzed the bovine genome (Bos taurus). The initial bovine genome assembly and analysis and the study of cattle genetic history were published April 24, 2009. Later efforts centered around finishing the Y chromosome. The most recent efforts to improve the genome are using Pacific Biosciences long-read data. We have produced 19-fold coverage of long read sequence data and combined these with the existing genome assembly using the PBJelly2 software. A de novo genome assembly using higher coverage PacBio data is planned in collaboration with Timothy Smith and Juan Medrano.

The source of the BA 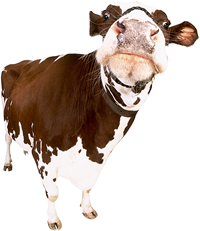 Current improvement efforts are funded by the United States Department of Agriculture National Institute of Food and Agriculture (2013-67015-21228) with support from the National Human Genome Research Institute (NHGRI U54 HG003273), which is part of the National Institutes of Health (NIH). Past funding for this project was also provided by: NHGRI U54 HG003273 as well as the U.S. Department of Agriculture's Agricultural Research Service and Cooperative State Research, Education, and Extension Service (USDA ARS Agreement No. 5 9-0790-3-196 and CSREES Agreement No. 2004-35216-14163); the state of Texas; Genome Canada through Genome British Columbia, The Commonwealth Scientific and Industrial Research Organization of Australia (CSIRO); Agritech Investments Ltd., Dairy Insight, Inc. and AgResearch Ltd., all of New Zealand; the Robert J. Kleberg, Jr. and Helen C. Kleberg Foundation; and the National, Texas and South Dakota Beef Check-off Funds.

Sequencing of the bovine (Hereford) genome consumed a large part of 2004-06 BCM-HGSC resources. The project was staged to produce an initial 3x WGS assembly followed by a second 6x WGS assembly to allow gene predictions for preliminary annotation, and a final assembly including BAC sequences for improved local assembly refinement. The 3x assembly was used by Ensembl to test their pipeline on low coverage genome assemblies. The 6x WGS assembly was released and gene predictions from Ensembl and NCBI have been made public. The final assembly has been completed using the Atlas assembler and BAC data from equal numbers of BACs sequenced individually or by the CAPSS clone pooling strategy.

WGS samples from six other breeds were sequenced to identify SNPs for genetic studies. A panel of 10,000 SNPs were mined at the HGSC from this interbreed dataset and genotyping reagents were developed. 227 animals representing 9 breeds were genotyped and analyzed. An expanded set of markers (32,000) was applied to a more extensive group of animals (449). The results form the basis of a Bovine HapMap Project. Affymetrix now markets a bovine genotyping chip based on this work, allowing broader translation of the genome project into applications.

Often the first phase of a genome sequencing project does not adequately address the Y chromosome. This project specifically targets mammalian Y chromosomes for additional sequencing and sequence finishing.