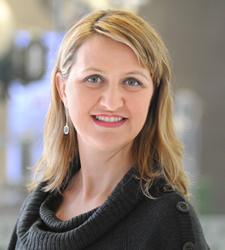 Aniko Sabo received her Ph.D. in the field of molecular phylogenetics from Purdue University in 2002 and has been doing research in the field of genomics for the last 12 years. She worked for three years as a Research Associate at the Genome Center at Washington University in St. Louis working on microbial and human annotation projects.

Since joining the BCM-HGSC, she has worked as a bioinformatics programmer and project manager and analysis lead for several projects.

She has extensive knowledge of capture methodology and the analysis of the next generation sequencing data.

Dr. Sabo has led the genome-level data analysis for several projects at the BCM-HGSC, including leading the validation efforts for several large-scale projects.

As the BCM-HGSC lead for the NIMH-funded Autism Genetics Project, she played a major role in the data analysis, development of initial genome variant lists, integration strategies for datasets from different sequencing and capture platforms, as well as interacting with collaborating groups and project investigators.

She has also been leading the analysis of exome sequencing data from atypical ciliopathy trios that resulted in discovery of several candidate genes that are currently undergoing functional validation follow-up.